Nate the Great and the Snowy Trail (Paperback) 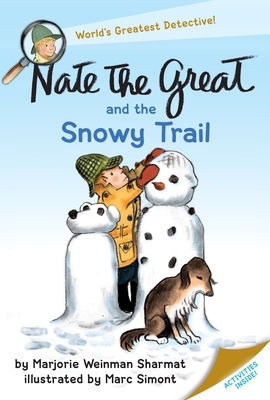 Nate the Great and the Snowy Trail (Paperback)


Not On Our Shelves—Ships in 1-5 Days
Beginning readers are introduced to the detective mystery genre in these chapter books. Perfect for the Common Core, kids can problem-solve with Nate, using logical thinking to solve mysteries!

Nate the Great has his work cut out for him. Rosamond has lost his birthday present! But how can Nate find his missing present when Rosamond won't tell him what it is?

Check out the Fun Activities section in the back of the book!

“Brisk and bright as always, with pictures of a lovably scowling Nate and a voguishly strange Rosamond . . . for added appeal.”—Kirkus Reviews

“Readers will have a dandy time following the case and will sympathize with Nate’s wish that he had failed to solve it when he finds the dismaying ‘present’.”—Publishers Weekly

“The tongue-in-cheek mystery unfolds briskly. Simont's . . . cartoons are in tune with Sharmat’s comic touch.”—Booklist
MARJORIE WEINMAN SHARMAT has written more than 130 books for children and young adults, as well as movie and TV novelizations. Her books have been translated into twenty-four languages. The award-winning Nate the Great series, hailed in Booklist as “groundbreaking,” has resulted in Nate’s real-world appearances in many New York Times crossword puzzles, sporting a milk mustache in magazines and posters, residing on more than 28 million boxes of Cheerios, and touring the country in musical theater. Marjorie Weinman Sharmat and her husband, Mitchell Sharmat, have also coauthored many books, including titles in both the Nate the Great and the Olivia Sharp series.

“Nate, Sludge, and all their friends have been delighting beginning readers for years.” —Kirkus Reviews

“They don’t come any cooler than Nate the Great.” —The Huffington Post