Masterpieces: The Best Science Fiction of the 20th Century (Paperback) 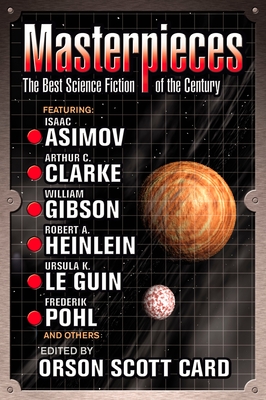 Masterpieces: The Best Science Fiction of the 20th Century (Paperback)


Not On Our Shelves—Ships in 1-5 Days
A collection of the best science fiction short stories of the 20th century as selected and evaluated by critically-acclaimed author Orson Scott Card.

In much of the science fiction of the past, the twenty-first century existed only in the writers’ imaginations. Now that it’s here, it’s time to take a look back at the last one hundred years in science fiction through the works of the most celebrated and acclaimed authors of the century—to see where we’ve been and just how far we’ve come.

Along with a critical essay by Orson Scott Card reassessing science fiction in the twentieth century, Masterpieces includes short fiction by writers who have forged a permanent place for science fiction in the popular culture of today...and tomorrow. It offers a glimpse of the greatest works that mixed science with fiction in trying to figure out humanity’s place in the universe. Featuring bold, brave, and breathtaking stories, this definitive collection will stand the test of time in both this century and those to come.

Orson Scott Card is the author of the international bestsellers Shadow of the Giant, Shadow Puppets, Shadow of the Hegemon, and Ender's Shadow, and of the beloved classic of science fiction, Ender's Game, as well as the acclaimed fantasy series The Tales of Alvin Maker. He lives in Greensboro, North Carolina.
Praise for Masterpieces

“[Masterpieces] provides an excellent case for science fiction as a literary form that matters.”—Science Fiction Weekly

“Will remind you why you fell in love with science fiction in the first place.”—Rocky Mountain News

“The classic stories in this anthology are as well chosen as you might expect, given editor Card’s formidable knowledge of the field and his fellow writers, knowledge that makes his introductory comments on each story very good, further enhancing the book’s considerable value for the classroom and as an introduction to major stories and writers for nonstudents.”—Booklist

“The giants of the genre contribute to this highly accessible collection…Replete with representative tales from the legendary Asimov, Heinlein, Bradbury, Clarke, Gibson, Le Guin, Pohl, Niven, Ellison, and Silverberg, this collection attempts to introduce readers not to the authors’ greatest hits but to some of their best but lesser-known works, and it is successful in almost every case.”—VOYA