An Object of Beauty: A Novel (Paperback) 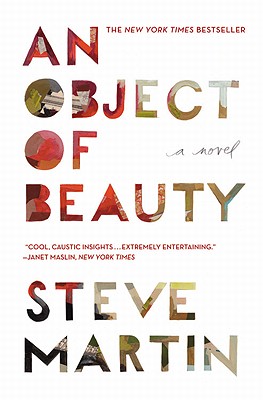 An Object of Beauty: A Novel (Paperback)

“There are two main characters in Steve Martin's impossibly smart new novel: Lacey Yeager, a gorgeous and cunning up-and-comer in the art world, who will do anything for success; and the art world itself, with all of its glitz, varied characters, and high-stakes schmoozing. I am now certain that there is nothing Steve Martin cannot write authentically about. Even those who know little about contemporary art will enjoy this novel, and they will definitely learn something along the way.”
— Kat Bailey, Bookshop Santa Cruz, Santa Cruz, CA

Lacey Yeager is young, captivating, and ambitious enough to take the NYC art world by storm. Groomed at Sotheby's and hungry to keep climbing the social and career ladders put before her, Lacey charms men and women, old and young, rich and even richer with her magnetic charisma and liveliness. Her ascension to the highest tiers of the city parallel the soaring heights--and, at times, the dark lows--of the art world and the country from the late 1990s through today.
Steve Martin is a legendary writer, actor, and performer. His film credits include Father of the Bride, Parenthood, The Spanish Prisoner, and Bringing Down the House, as well as Roxanne, L.A. Story, and Bowfinger, for which he also wrote the screenplays.

He's won Emmys for his television writing and two Grammys for comedy albums. In addition to a play, Picasso at the Lapin Agile, he has written a bestselling collection of comic pieces, Pure Drivel, and a bestselling novella, Shopgirl, which was made into a movie. His work appears frequently in The New Yorker and The New York Times.