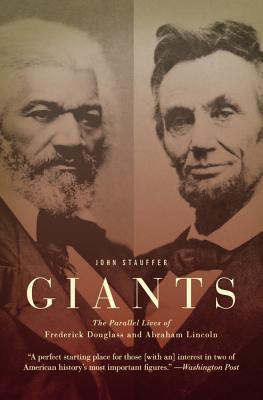 
Not On Our Shelves—Ships in 1-5 Days
Frederick Douglass and Abraham Lincoln were the preeminent self-made men of their time. In this masterful dual biography, award-winning Harvard University scholar John Stauffer describes the transformations in the lives of these two giants during a major shift in cultural history, when men rejected the status quo and embraced new ideals of personal liberty. As Douglass and Lincoln reinvented themselves and ultimately became friends, they transformed America.

Lincoln was born dirt poor, had less than one year of formal schooling, and became the nation's greatest president. Douglass spent the first twenty years of his life as a slave, had no formal schooling-in fact, his masters forbade him to read or write-and became one of the nation's greatest writers and activists, as well as a spellbinding orator and messenger of audacious hope, the pioneer who blazed the path traveled by future African-American leaders.

At a time when most whites would not let a black man cross their threshold, Lincoln invited Douglass into the White House. Lincoln recognized that he needed Douglass to help him destroy the Confederacy and preserve the Union; Douglass realized that Lincoln's shrewd sense of public opinion would serve his own goal of freeing the nation's blacks. Their relationship shifted in response to the country's debate over slavery, abolition, and emancipation.

Both were ambitious men. They had great faith in the moral and technological progress of their nation. And they were not always consistent in their views. John Stauffer describes their personal and political struggles with a keen understanding of the dilemmas Douglass and Lincoln confronted and the social context in which they occurred. What emerges is a brilliant portrait of how two of America's greatest leaders lived.
John Stauffer is Professor of English and American Literature and Language at Harvard University. His first book, The Black Hearts of Men: Radical Abolitionists and the Transformation of Race (Harvard University Press, 2002), was the co-winner of the 2002 Frederick Douglass Book Prize from the Gilder Lehrman Institue; winner of the Avery Craven Book Prize from the OAH; and the Lincoln Prize runner-up. Other works include: Meteor of War: The John Brown Story (with Zoe Trodd, 2004); Frederick Douglass' My Bondage and My Freedom (editor, 2003). Visit his website at http://johnstaufferbooks.com/.
"John Stauffer's GIANTS is a lyrical, insightful treatment of the fascinating relationship between two geniuses, one a politician and the other a radical reformer. Both Lincoln and Douglass heard the music of words in their heads as few others, and Stauffer has an ear for the two of them in harmony. That they started in such different places ideologically and yet moved together at the critical moment of emancipation makes this a timely and important book. Stauffer brings the tools of literature and history to bear on this comparison with unmatched skill."—David W. Blight, Yale University, author of Frederick Douglass' Civil War and A Slave No More

"In this stunning book, John Stauffer has given us the most insightful portrait of either Lincoln or Douglass in years. In graceful prose, he tells a moving story of the two men who dominated Nineteenth century American life -- as allies across the racial divide, friends who drew common inspiration from hard scrabble beginnings and a love of language, and fellow travelers on the road of American self-making. Giants is simply must reading!"—Richard S. Newman, author of Freedom's Prophet: Bishop Richard Allen, the AME Church, and the Black Founding Fathers

Like a daguerreotype, which nineteenth-century Americans thought captured not simply surface appearances, but peoples' souls, this book moves beyond biography to allow us to recover the inner lives of two utterly uncommon common men. This is the most insightful book about race and friendship in the nineteenth century that I have read. It's poignant and perceptive, a book to be savored, a book that will last.—Steven Mintz, Columbia University, author of America and Its Peoples: A Mosaic in the Making

"John Stauffer's collective biography of Frederick Douglass and Abraham Lincoln stands apart from other biographies by focusing on how each man continually remade himself, with help from women, words, self-education, physical strength, and luck. In the process Stauffer gives us the texture and feel--a "thick description"--of the strange worlds that Douglass and Lincoln inhabited. The result is a path-breaking work that dissolves traditional conceptions of these two seminal figures (Lincoln the "redeemer" president, Douglass the assimilationist). He reveals how Douglass towered over Lincoln as a brilliant orator, writer, agitator, and public figure for most of his life. He shows us how words became potent weapons for both men. And he tells the poignant story of how these preeminent self-made men ultimately converged, despite their vastly different agendas and politics, and helped transform the nation."—Henry Louis Gates, Jr., Harvard University, author of The African American Century: How Black Americans Have Shaped Our Century