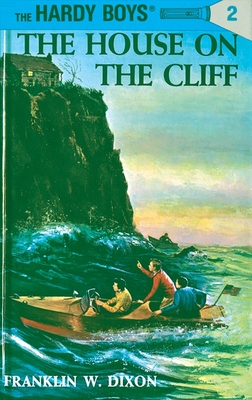 This is book number 2 in the The Hardy Boys series.

Frank and Joe Hardy are investigating a mysterious old house high on the cliffs above Barmet Bay when they are frightened off by a scream. The boys return to the apparently haunted house when they make a connection between the place and a smuggling case their father is working on. When their father goes missing, they have to investigate the caves beneath the house and confront the smugglers.
Franklin W. Dixon is a pen name used by a variety of authors writing for the classic series, The Hardy Boys. The first and most well-known "Franklin W. Dixon" was Leslie McFarlane, a Canadian author who contributed 19 of the first 25 books in the series. Other writers who have adopted the pseudonym include Christopher Lampton, John Button, Amy McFarlane, and Harriet Stratemeyer Adams.