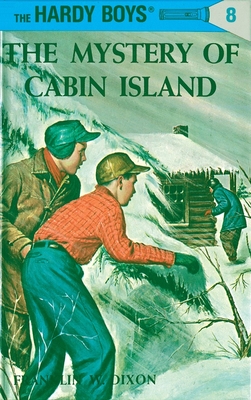 This is book number 8 in the The Hardy Boys series.

With two mysteries to solve, Frank and Joe must climb aboard their iceboat the Sea Gull to reach Cabin Island, where a belligerent stranger orders them off. Sabotage to the boat, danger to themselves, and a ghostly prowler do not daunt the Hardy boys in their search for Johnny Jefferson and for clues to stolen antique medals. How the teenage investigators outwit a ruthless foe and succeed in solving both mysteries makes for mounting suspense in this brisk-paced adventure.
Franklin W. Dixon is a pen name used by a variety of authors writing for the classic series, The Hardy Boys. The first and most well-known "Franklin W. Dixon" was Leslie McFarlane, a Canadian author who contributed 19 of the first 25 books in the series. Other writers who have adopted the pseudonym include Christopher Lampton, John Button, Amy McFarlane, and Harriet Stratemeyer Adams.