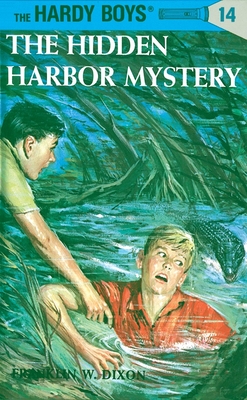 This is book number 14 in the The Hardy Boys series.

The boys once again have jumped into the thick of a complicated mystery. Samuel Blacksone and his brother Ruel Rand live on adjacent properties, and it appears that one of them is out to hurt the other because they are both attacked. Frank and Joe soon learn that treasure is rumored to be hidden between the two properties, and as they investigate, they learn that others are involved in the apparent plot between the two brothers. Spooky mansions, secret passages and rooms, mysterious characters, and a monster provide an enjoyable atmosphere to this Hardy Boys mystery.
Franklin W. Dixon is a pen name used by a variety of authors writing for the classic series, The Hardy Boys. The first and most well-known "Franklin W. Dixon" was Leslie McFarlane, a Canadian author who contributed 19 of the first 25 books in the series. Other writers who have adopted the pseudonym include Christopher Lampton, John Button, Amy McFarlane, and Harriet Stratemeyer Adams.