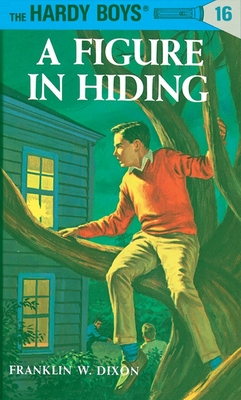 This is book number 16 in the The Hardy Boys series.

A blind peddler’s warning and a weird glass eye plunge Frank and Joe Hardy into one of the most baffling cases they have ever tackled. The young detectives’ investigation takes them to a walled estate guarded by savage dogs, where a wealthy businessman is hiding out in fear for his life. In a climax that will hold the reader spellbound with suspense, Frank and Joe find themselves trapped in a sinister house of mystery where there seems to be no escape!
Franklin W. Dixon is a pen name used by a variety of authors writing for the classic series, The Hardy Boys. The first and most well-known "Franklin W. Dixon" was Leslie McFarlane, a Canadian author who contributed 19 of the first 25 books in the series. Other writers who have adopted the pseudonym include Christopher Lampton, John Button, Amy McFarlane, and Harriet Stratemeyer Adams.