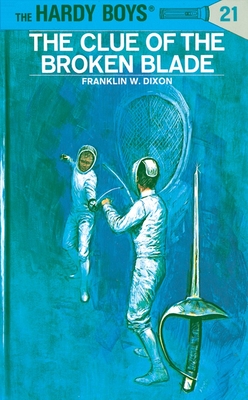 This is book number 21 in the The Hardy Boys series.

Frank and Joe Hardy become involved in an intriguing mystery which revolves around their fencing master, Ettore Russo. Proof that Russo is the rightful heir to his grandfather’s estate hinges on retrieving the guard end of a broken saber lost many years ago in California. The young investigators’ quest is complicated by a bank robbery during which some of their father’s important records are stolen. A chase ensues in the grape-growing region of California as the boys engage in a dangerous game of hide-and-seek with the bank robbery gang.
Franklin W. Dixon is a pen name used by a variety of authors writing for the classic series, The Hardy Boys. The first and most well-known "Franklin W. Dixon" was Leslie McFarlane, a Canadian author who contributed 19 of the first 25 books in the series. Other writers who have adopted the pseudonym include Christopher Lampton, John Button, Amy McFarlane, and Harriet Stratemeyer Adams.