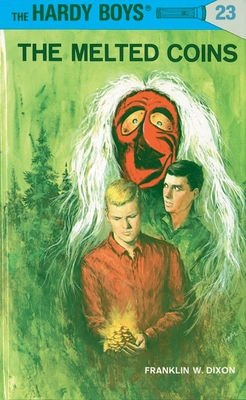 This is book number 23 in the The Hardy Boys series.

Frank and Joe Hardy suspect that their best friend Chet Morton is the victim of a summer school swindle and offer to help get his money back. While probing a baffling burglary at the Seneca Indian Reservation in New York State they investigate Zoar College located nearby. A startling connection between the Zoar College swindle and the theft of the Seneca’s gold tribal relic Spoon Mouth propels the teenage sleuths into a series of perplexing and dangerous situations.
Franklin W. Dixon is a pen name used by a variety of authors writing for the classic series, The Hardy Boys. The first and most well-known "Franklin W. Dixon" was Leslie McFarlane, a Canadian author who contributed 19 of the first 25 books in the series. Other writers who have adopted the pseudonym include Christopher Lampton, John Button, Amy McFarlane, and Harriet Stratemeyer Adams.