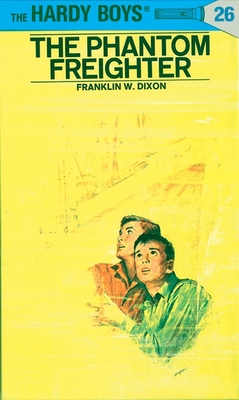 This is book number 26 in the The Hardy Boys series.

When eccentric Thaddeus McClintock invites Frank and Joe Hardy to accompany him on a sea voyage, the teenage investigators become entangled in a web of mystery. Who is trying to block the three from securing reservation on freighter ships that carry passengers? The determined efforts of Frank and Joe lead to a hazardous game of wits with a ring of slippery smugglers and to a dramatic confrontation on the high seas. Here is an exciting, action-filled mystery that will keep the reader on edge with suspense.
Franklin W. Dixon is a pen name used by a variety of authors writing for the classic series, The Hardy Boys. The first and most well-known "Franklin W. Dixon" was Leslie McFarlane, a Canadian author who contributed 19 of the first 25 books in the series. Other writers who have adopted the pseudonym include Christopher Lampton, John Button, Amy McFarlane, and Harriet Stratemeyer Adams.