Hardy Boys 29: the Secret of the Lost Tunnel (The Hardy Boys #29) (Hardcover) 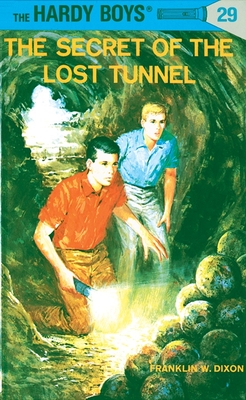 Hardy Boys 29: the Secret of the Lost Tunnel (The Hardy Boys #29) (Hardcover)

This is book number 29 in the The Hardy Boys series.

Difficult assignments are nothing new to the Hardy boys and this one that takes them to the Deep South is particularly challenging. Their mission: to vindicate a long-dead Confederate general, disgraced during the Civil War because he was accused of stealing hidden gold belonging to a bank.  Skillfully avoiding booby traps and flying bullets, the boys persevere in their perilous quest. The arduous search is full of surprises that will thrill all fans of the Hardy boys.
Franklin W. Dixon is a pen name used by a variety of authors writing for the classic series, The Hardy Boys. The first and most well-known "Franklin W. Dixon" was Leslie McFarlane, a Canadian author who contributed 19 of the first 25 books in the series. Other writers who have adopted the pseudonym include Christopher Lampton, John Button, Amy McFarlane, and Harriet Stratemeyer Adams.