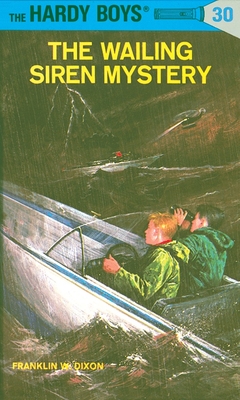 This is book number 30 in the The Hardy Boys series.

Caught in their motorboat the Sleuth by a sudden storm at sea, Frank and Joe Hardy are relieved to see the lights of a yacht. But their SOS ignored. The shrill sound of a siren fills the night air and moments later a helicopter drops an object alongside the Sleuth: a wallet containing two thousand dollars! The next day, a truck carrying a shipment of high-powered rifles has been stolen. These two apparently unconnected events are clues in a tangle of mystery which turns out to be one of the detective brothers’ most exciting adventures.
Franklin W. Dixon is a pen name used by a variety of authors writing for the classic series, The Hardy Boys. The first and most well-known "Franklin W. Dixon" was Leslie McFarlane, a Canadian author who contributed 19 of the first 25 books in the series. Other writers who have adopted the pseudonym include Christopher Lampton, John Button, Amy McFarlane, and Harriet Stratemeyer Adams.