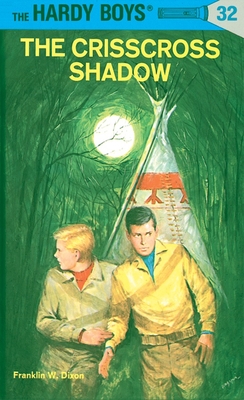 This is book number 32 in the The Hardy Boys series.

When a man selling leather goods door-to-door steals the key to their detective father’s file cabinet, Frank and Joe Hardy set out to track him down. An odd mark on a key case which the man sold to their mother leads the teenage sleuths to an Indian village, whose chiefs begs them to help him find valuable tribal possessions and the deed for his land. How Frank and Joe find the missing deed and Ramapan treasures, how they prevent the phony leather-goods salesman from carrying out a ruthless scheme and how they help their father solve the top-secret case he is working on for the U.S. government makes exciting reading for all fans of the Hardy boys.
Franklin W. Dixon is a pen name used by a variety of authors writing for the classic series, The Hardy Boys. The first and most well-known "Franklin W. Dixon" was Leslie McFarlane, a Canadian author who contributed 19 of the first 25 books in the series. Other writers who have adopted the pseudonym include Christopher Lampton, John Button, Amy McFarlane, and Harriet Stratemeyer Adams.