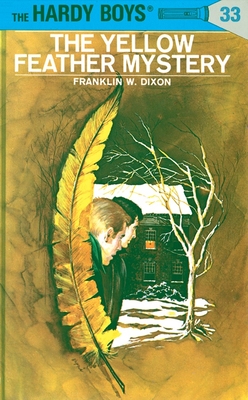 This is book number 33 in the The Hardy Boys series.

The famous young detectives Frank and Joe Hardy are caught up in a dangerous web of intrigue when they agree to help Greg Woodson search for his grandfather’s missing will. When Henry Kurt, the temporary headmaster of Woodson Academy, insists that he is to inherit the property from Greg’s grandfather, the case becomes even trickier. Frank and Joe must risk their lives several times before they solve the mystery of Yellow Feather and trap a sinister criminal who will stop at nothing--even murder--to satisfy his greed for money.
Franklin W. Dixon is a pen name used by a variety of authors writing for the classic series, The Hardy Boys. The first and most well-known "Franklin W. Dixon" was Leslie McFarlane, a Canadian author who contributed 19 of the first 25 books in the series. Other writers who have adopted the pseudonym include Christopher Lampton, John Button, Amy McFarlane, and Harriet Stratemeyer Adams.