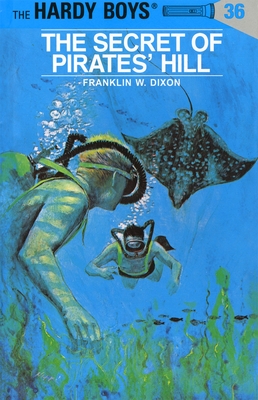 This is book number 36 in the The Hardy Boys series.

In a series of hair-raising adventures both on land and undersea the teenage brother detectives pit their wits against some of the most ruthless criminals they have ever encountered. It all starts when Frank and Joe are skin diving just for fun and the thrill of exploring the undersea world. Suddenly, deep in the waters that flow near the foot of Pirates’ Hill, a mysterious skin diver fires a spear through Frank’s air hose. From this moment on, danger is never far away. The very lives of the boys are at stake as they, along with the help of their pals, uncover a mystery involving an old Spanish cannon and a fabulous sunken treasure.
Franklin W. Dixon is a pen name used by a variety of authors writing for the classic series, The Hardy Boys. The first and most well-known "Franklin W. Dixon" was Leslie McFarlane, a Canadian author who contributed 19 of the first 25 books in the series. Other writers who have adopted the pseudonym include Christopher Lampton, John Button, Amy McFarlane, and Harriet Stratemeyer Adams.