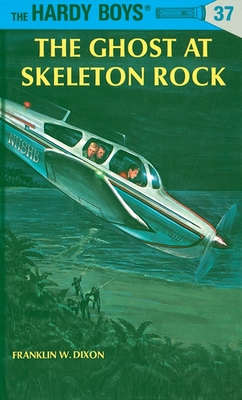 This is book number 37 in the The Hardy Boys series.

A cryptic message from their famous detective father and a note concealed in a ventriloquist’s dummy lead Frank and Joe Hardy on a dangerous search to the tropical islands in the Caribbean. There the teenage detectives are constantly beset by vicious henchmen of a criminal mastermind. Danger stalks the boys’ every move, once in an isolated sugar mill, another time in a shark-infested sea. But when Frank and Joe come face to face with the ghost at Skeleton Rock, it will be as much of a surprise to the reader as it was to the young detectives themselves.
Franklin W. Dixon is a pen name used by a variety of authors writing for the classic series, The Hardy Boys. The first and most well-known "Franklin W. Dixon" was Leslie McFarlane, a Canadian author who contributed 19 of the first 25 books in the series. Other writers who have adopted the pseudonym include Christopher Lampton, John Button, Amy McFarlane, and Harriet Stratemeyer Adams.