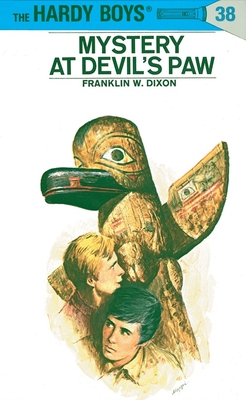 This is book number 38 in the The Hardy Boys series.

When Frank and Joe Hardy receive a telegram from Tony Prito in Alaska telling them that his life is in jeopardy, they immediately make plans to fly to Tony’s rescue.  Unknown enemies dog the Hardys and their pal Chet Morton even before they start the 4,000 mile journey. Puzzling questions lead the Hardys into dangerous sleuthing in the wilderness of Alaska and British Columbia. The astounding secret that the young detectives uncover, in the shadow of the forbidding mountain peak Devil’s Paw, winds up one of the most perilous adventures they have ever encountered.
Franklin W. Dixon is a pen name used by a variety of authors writing for the classic series, The Hardy Boys. The first and most well-known "Franklin W. Dixon" was Leslie McFarlane, a Canadian author who contributed 19 of the first 25 books in the series. Other writers who have adopted the pseudonym include Christopher Lampton, John Button, Amy McFarlane, and Harriet Stratemeyer Adams.