Hardy Boys 41: The Clue of the Screeching Owl (The Hardy Boys #41) (Hardcover) 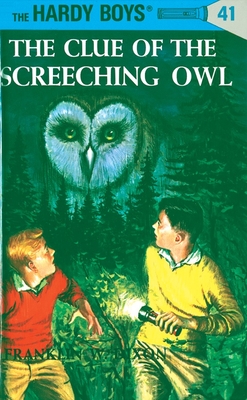 Hardy Boys 41: The Clue of the Screeching Owl (The Hardy Boys #41) (Hardcover)

This is book number 41 in the The Hardy Boys series.

When dogs and men suddenly disappear, and strange screams fill the night, fantastic stories of vengeful ghosts are almost believable. It is these strange happenings which bring Frank and Joe Hardy to the Pocono Mountains to help their father’s friend solve the mystery of Black Hollow. But when the Hardy boys and Chet Morton arrive at Captain Thomas Maguire’s cabin on the edge of the hollow, he has disappeared. Frank and Joe are determined to find the captain, despite Chet’s misgivings after a night of weird and terrifying screams. Strangely, it is a small puppy that discloses a most unusual and surprising set of circumstances, involving a mute boy, an elusive hermit, and a fearless puma trainer.
Franklin W. Dixon is a pen name used by a variety of authors writing for the classic series, The Hardy Boys. The first and most well-known "Franklin W. Dixon" was Leslie McFarlane, a Canadian author who contributed 19 of the first 25 books in the series. Other writers who have adopted the pseudonym include Christopher Lampton, John Button, Amy McFarlane, and Harriet Stratemeyer Adams.