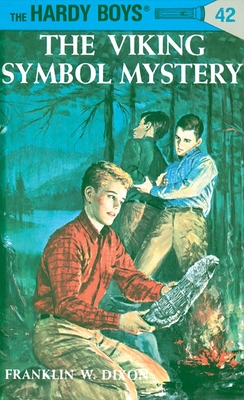 This is book number 42 in the The Hardy Boys series.

The Canadian Northwest beckons Frank and Joe Hardy to mystery and adventure. It all starts when a French-Canadian trapper, Caribou Caron, makes a historical and valuable find–-a carved rune stone left by Vikings centuries ago near Great Slave Lake. When Caribou Caron attempts to sell the artifact to a representative of a museum, it is snatched by thieves. Like the intrepid Vikings of old, Frank and Joe, with their close pal Chet Morton, set off on a perilous quest in the Northwest Territories to recover the valuable artifact before the robbers can decipher the symbols leading to the buried treasure.
Franklin W. Dixon is a pen name used by a variety of authors writing for the classic series, The Hardy Boys. The first and most well-known "Franklin W. Dixon" was Leslie McFarlane, a Canadian author who contributed 19 of the first 25 books in the series. Other writers who have adopted the pseudonym include Christopher Lampton, John Button, Amy McFarlane, and Harriet Stratemeyer Adams.