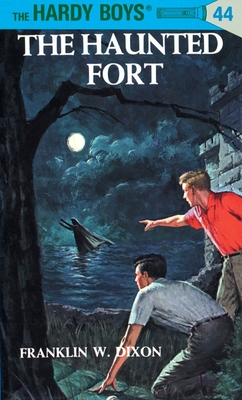 This is book number 44 in the The Hardy Boys series.

A long-distance telephone call from Chet Morton’s uncle summons Frank and Joe Hardy and their staunch pal Chet to a summer art school, located near old Fort Senandaga which is reputed to be inhabited by a ghost. The young detectives’ assignment: recover two famous oil paintings stolen from the valuable Prisoner-Painter collection owned by Jefferson Davenport. Mr. Davenport reveals that one of the famous pictures contains a clue to the hiding place of a priceless gold chain. Vicious threats and deadly traps beset Frank, Joe, and Chet as they search for clues to the stolen paintings and the gold treasure – a search that is complicated by the stormy feud between an Englishman and a Frenchman over the military history of the ancient fort.
Franklin W. Dixon is a pen name used by a variety of authors writing for the classic series, The Hardy Boys. The first and most well-known "Franklin W. Dixon" was Leslie McFarlane, a Canadian author who contributed 19 of the first 25 books in the series. Other writers who have adopted the pseudonym include Christopher Lampton, John Button, Amy McFarlane, and Harriet Stratemeyer Adams.