Hardy Boys 45: the Mystery of the Spiral Bridge (The Hardy Boys #45) (Hardcover) 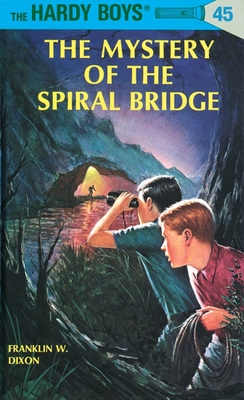 Hardy Boys 45: the Mystery of the Spiral Bridge (The Hardy Boys #45) (Hardcover)

This is book number 45 in the The Hardy Boys series.

Frank and Joe Hardy are determined to bring to justice the vicious criminals who kidnapped their detective father while he was investigation sabotage of a road-building project in the Kentucky wilderness. After Mr. Hardy’s escape, the two young sleuths are spurred into action when he mumbles the word “Felix” and they discover a dossier of a notorious ex-convict was stolen from his files. The trail leads them to New York City but ends abruptly in a cemetery! With the new clue of a spiral symbol the boys head to Kentucky as part of a highway construction crew to track down the kidnappers and saboteurs.
Franklin W. Dixon is a pen name used by a variety of authors writing for the classic series, The Hardy Boys. The first and most well-known "Franklin W. Dixon" was Leslie McFarlane, a Canadian author who contributed 19 of the first 25 books in the series. Other writers who have adopted the pseudonym include Christopher Lampton, John Button, Amy McFarlane, and Harriet Stratemeyer Adams.