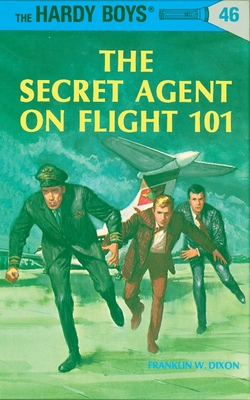 This is book number 46 in the The Hardy Boys series.

Rarely do magicians reveal their professional secrets. Consequently Frank and Joe Hardy are amazed when a well-known magician, the Incredible Hexton, offers to reveal the secret of his “Vanishing Man Act” and invited Mr. Hardy to be the subject. When their detective father fails to reappear, his sons are convinced that something sinister is afoot, despite Hexton’s insistence that Mr. Hardy is playing a joke on them. While desperately searching for their father, Frank and Joe find themselves working with SKOOL, a U.S. organization of secret agents pitted against UGLI, an international ring of spies stealing government secrets domestically and internationally. The young detective’s gripping adventures culminate in a dramatic climax when they unmask the secret agent on Flight 101.
Franklin W. Dixon is a pen name used by a variety of authors writing for the classic series, The Hardy Boys. The first and most well-known "Franklin W. Dixon" was Leslie McFarlane, a Canadian author who contributed 19 of the first 25 books in the series. Other writers who have adopted the pseudonym include Christopher Lampton, John Button, Amy McFarlane, and Harriet Stratemeyer Adams.