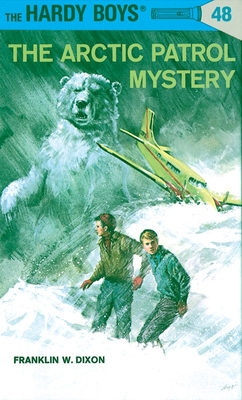 This is book number 48 in the The Hardy Boys series.

Private investigator Fenton Hardy enlists the aid of his teenage detective sons in a search for a missing man being sought by an insurance company. All leads to the sailor’s whereabouts have petered out and the boys fly to Iceland, the man’s native land, hoping to find a new clue. From the moment Frank and Joe arrive in Reykjavik, the capital city of Iceland, they are in constant danger.  In the spine-chilling pursuit that follows, Frank and Joe uncover a diabolical espionage plot that threatens the life of a U.S. astronaut and NASA’S moon project.
Franklin W. Dixon is a pen name used by a variety of authors writing for the classic series, The Hardy Boys. The first and most well-known "Franklin W. Dixon" was Leslie McFarlane, a Canadian author who contributed 19 of the first 25 books in the series. Other writers who have adopted the pseudonym include Christopher Lampton, John Button, Amy McFarlane, and Harriet Stratemeyer Adams.