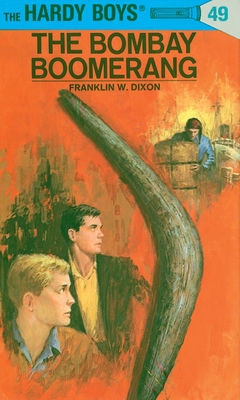 This is book number 49 in the The Hardy Boys series.

Frank and Joe Hardy become involved in a case affecting national security when Joe dials a wrong telephone number and gets the Pentagon. Two words— “Bombay Boomerang”— that the boys hear before the line goes dead plunge them into a whirlpool of danger and intrigue. At the same time, Frank and Joe must save their father from a murderous gang stealing mercury shipments in the Baltimore harbor. With clues linking the mercury thefts to the top secret Super S missile mysteriously stolen from a government arsenal. In a race against time, the three Hardys foil a diabolical scheme to create widespread havoc in the United States.
Franklin W. Dixon is a pen name used by a variety of authors writing for the classic series, The Hardy Boys. The first and most well-known "Franklin W. Dixon" was Leslie McFarlane, a Canadian author who contributed 19 of the first 25 books in the series. Other writers who have adopted the pseudonym include Christopher Lampton, John Button, Amy McFarlane, and Harriet Stratemeyer Adams.