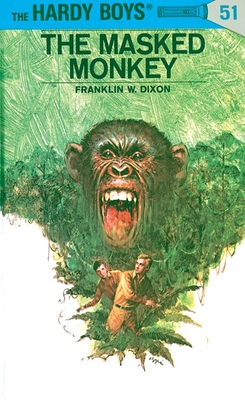 This is book number 51 in the The Hardy Boys series.

Frank and Joe are called upon to find a wealthy industrialist’s son who has mysteriously disappeared. The only clue in the case leads the two young detectives to South America, where the intrigues of evil adversaries almost cost them their lives. Only through their courage and perseverance do the Hardys solve one of the toughest cases they have ever tackled.
Franklin W. Dixon is a pen name used by a variety of authors writing for the classic series, The Hardy Boys. The first and most well-known "Franklin W. Dixon" was Leslie McFarlane, a Canadian author who contributed 19 of the first 25 books in the series. Other writers who have adopted the pseudonym include Christopher Lampton, John Button, Amy McFarlane, and Harriet Stratemeyer Adams.