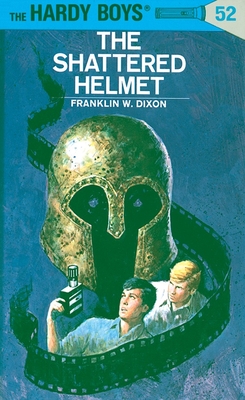 This is book number 52 in the The Hardy Boys series.

Danger is the name of the game when the Hardys agree to help their pen pal from Greece, Evan Pandropolos, search for a priceless, ancient Greek helmet. Years ago, Evan’s uncle had loaned it to Hollywood movie company for use in a silent motion picture, but the treasured helmet had been lost. Picking up foes along the way, the young detectives unearth clues that keep them constantly on the move—from their Greek college campus to California and finally to Greece.
Franklin W. Dixon is a pen name used by a variety of authors writing for the classic series, The Hardy Boys. The first and most well-known "Franklin W. Dixon" was Leslie McFarlane, a Canadian author who contributed 19 of the first 25 books in the series. Other writers who have adopted the pseudonym include Christopher Lampton, John Button, Amy McFarlane, and Harriet Stratemeyer Adams.