Hardy Boys 53: the Clue of the Hissing Serpent (The Hardy Boys #53) (Hardcover) 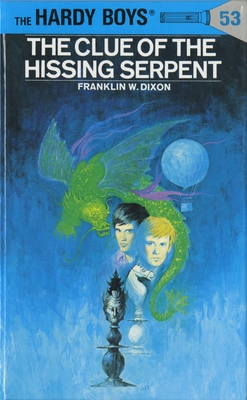 Hardy Boys 53: the Clue of the Hissing Serpent (The Hardy Boys #53) (Hardcover)

This is book number 53 in the The Hardy Boys series.

Why is a wealthy sportsman so frightened by the serpent design on a mysterious balloon that he begs Frank and Joe Hardy to protect him? And who stole the ancient life-size chess king which is to be presented to the winner of the world chess championship? Targets of diabolical enemies, Frank and Joe find a clue that leads them across the Pacific to Hong Kong to help the police smash an international criminal organization.
Franklin W. Dixon is a pen name used by a variety of authors writing for the classic series, The Hardy Boys. The first and most well-known "Franklin W. Dixon" was Leslie McFarlane, a Canadian author who contributed 19 of the first 25 books in the series. Other writers who have adopted the pseudonym include Christopher Lampton, John Button, Amy McFarlane, and Harriet Stratemeyer Adams.