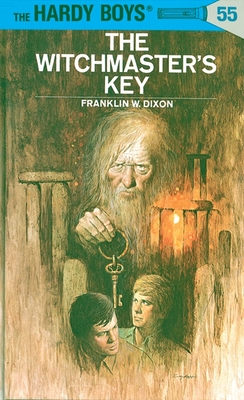 This is book number 55 in the The Hardy Boys series.

There is not time for explanations when Mr. hardy telephones Frank and Joe form the West Coast and sends them flying off to England to help his old friend Professor Rowbotham. Their stay in East Anglia begins with a weird omen, as they witness the bizarre funeral of an old witchmaster. From then on, strange things happen. When the Hardys learn about the strange disappearance of Lord Craighead, the plot deepens. Danger follows them to Ireland as Frank and Joe survive a shipwreck and find a clue from a frightened white which that leads to the torture chamber of a black witches’ coven, all in search of the telltale Witchmaster’s Key.
Franklin W. Dixon is a pen name used by a variety of authors writing for the classic series, The Hardy Boys. The first and most well-known "Franklin W. Dixon" was Leslie McFarlane, a Canadian author who contributed 19 of the first 25 books in the series. Other writers who have adopted the pseudonym include Christopher Lampton, John Button, Amy McFarlane, and Harriet Stratemeyer Adams.