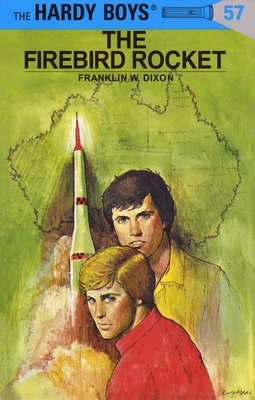 This is book number 57 in the The Hardy Boys series.

The launching of the Firebird Rocket is endangered when a famous rocket scientist disappears without a trace on his way to the Woomera Monitoring Station in Australia. Assigned to the case, Fenton Hardy tells his sons he needs their help. And Frank and Joe must turn down a request that they find the missing son of a prominent senator. With courage, wit, and clever detective work, the young detectives begin to close in on the enemy, only to discover that the tables have been turned. Captured by their cunning adversaries, the Hardys face certain death! Will they escape? Will the Firebird Rocket ever be launched?
Franklin W. Dixon is a pen name used by a variety of authors writing for the classic series, The Hardy Boys. The first and most well-known "Franklin W. Dixon" was Leslie McFarlane, a Canadian author who contributed 19 of the first 25 books in the series. Other writers who have adopted the pseudonym include Christopher Lampton, John Button, Amy McFarlane, and Harriet Stratemeyer Adams.