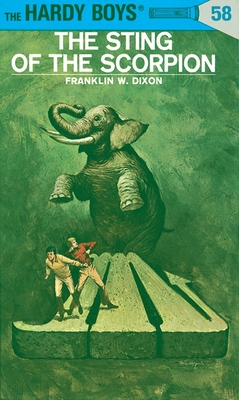 This is book number 58 in the The Hardy Boys series.

During Mr. Hardy’s investigation of a ruthless gang of terrorists, Frank and Joe witness an explosion in the sky near an airborne dirigible owned by Quinn Air Fleet. The young detectives look into a clue that takes them into a new animal park outside Bayport, where they are lured into a trap by an unknown enemy. Problems arise for the park owner as he receives pressure from a competitor and a real-estate firm to sell out. Strange occurrences at the park also frighten the visitors and animals. Frank and Joe take up the case despite fore warnings.
Franklin W. Dixon is a pen name used by a variety of authors writing for the classic series, The Hardy Boys. The first and most well-known "Franklin W. Dixon" was Leslie McFarlane, a Canadian author who contributed 19 of the first 25 books in the series. Other writers who have adopted the pseudonym include Christopher Lampton, John Button, Amy McFarlane, and Harriet Stratemeyer Adams.