Where Is the Brooklyn Bridge? (Where Is?) (Paperback) 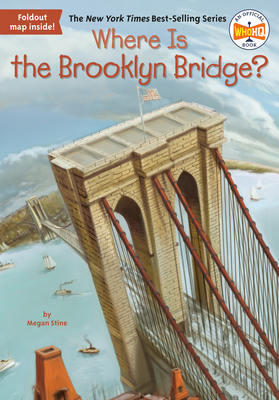 Where Is the Brooklyn Bridge? (Where Is?) (Paperback)


In Stock—Click for Locations
Young readers will connect with the story of this National Historic Landmark--the Brooklyn Bridge!

Building the Brooklyn Bridge was no simple feat. Despite a brilliant plan from a father-son team of engineers, the process was a dangerous and grueling one. Construction workers developed a mysterious illness (now known as the bends), several died, and the project had devastating effects on the engineers' lives. Still, after fourteen years, the Brooklyn Bridge was finished and became the longest suspension bridge in the world at the time and is still widely admired today. Megan Stine tells the fascinating story behind one of the city's best-loved landmarks. Includes black-and-white illustrations and a foldout color map!
Megan Stine has written several books for young readers, including Where Is the White House?, Who Was Marie Curie?, Who Was Ulysses S. Grant?, Who Is Michelle Obama?, and Who Was Sally Ride? She lives in Clinton, Connecticut.