What Was Woodstock? (What Was?) (Paperback) 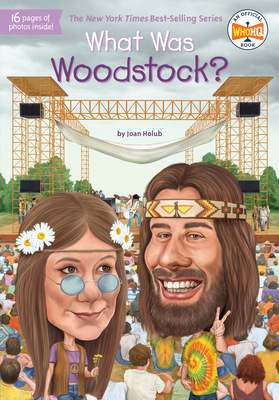 What Was Woodstock? (What Was?) (Paperback)


Special Order—Subject to Availability
On August 15, 1969, a music festival called "Woodstock" transformed one small dairy farm in upstate New York into a gathering place for over 400,000 young music fans. Concert-goers, called "hippies," traveled from all over the country to see their favorite musicians perform. Famous artists like The Grateful Dead played day and night in a celebration of peace, love, and happiness. Although Woodstock lasted only three days, the spirit of the festival has defined a generation and become a symbol of the "hippie life."

American Association of University Women Award for Juvenile Literature 2016 Nominee.
Joan Holub is the author of What Was the First Thanksgiving?, What Was the Gold Rush?, and other Who Was...? titles, including Who Was Marco Polo? and Who Was Babe Ruth?