Who Was Princess Diana? (Who Was?) (Paperback) 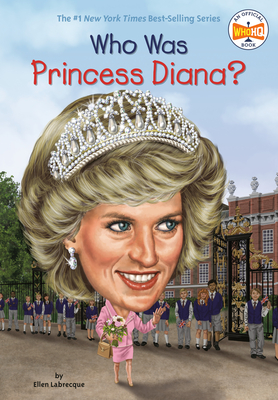 Who Was Princess Diana? (Who Was?) (Paperback)


Not On Our Shelves—Ships in 1-5 Days
Learn how Lady Diana Spencer became the People's Princess as she takes her place in the ranks of the Who Was? series.

A shy twenty-year-old girl stepped out of a horse-drawn coach and into the world spotlight, capturing the imagination of millions as a real life fairytale princess. Although the storybook marriage didn't have a happy ending, Diana learned to use her fame as a way to champion charitable causes near to her heart. She became the People's Princess by humanizing the image of the royal family and showing care and concern for all people, including the homeless, the sick, and others in need.
Ellen Labrecque is a former Senior Editor for Sports Illustrated for Kids and the author of over twenty nonfiction books for young readers, including biographies of Jim Thorpe and Magic Johnson.

Jerry Hoare is married with two musician/actor sons and a crazy terrier dog. He has provided pictorial work for many different things in many different styles, but he has a particular fondness for line work--be it loose pen or the strict thicks and thins, to denote tonal change like that of engraving.