War at the End of the World: Douglas MacArthur and the Forgotten Fight For New Guinea, 1942-1945 (Hardcover) 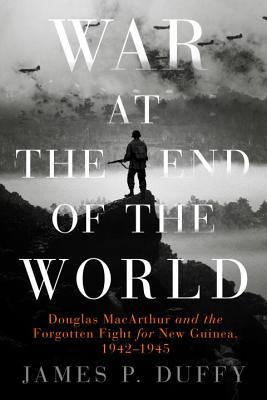 War at the End of the World: Douglas MacArthur and the Forgotten Fight For New Guinea, 1942-1945 (Hardcover)


Backordered
A harrowing account of an epic, yet nearly forgotten, battle of World War II—General Douglas MacArthur's four-year assault on the Pacific War's most hostile battleground: the mountainous, jungle-cloaked island of New Guinea.

“A meaty, engrossing narrative history… This will likely stand as the definitive account of the New Guinea campaign.”—The Christian Science Monitor

One American soldier called it “a green hell on earth.” Monsoon-soaked wilderness, debilitating heat, impassable mountains, torrential rivers, and disease-infested swamps—New Guinea was a battleground far more deadly than the most fanatical of enemy troops. Japanese forces numbering some 600,000 men began landing in January 1942, determined to seize the island as a cornerstone of the Empire’s strategy to knock Australia out of the war. Allied Commander-in-Chief General Douglas MacArthur committed 340,000 Americans, as well as tens of thousands of Australian, Dutch, and New Guinea troops, to retake New Guinea at all costs.

What followed was a four-year campaign that involved some of the most horrific warfare in history. At first emboldened by easy victories throughout the Pacific, the Japanese soon encountered in New Guinea a roadblock akin to the Germans’ disastrous attempt to take Moscow, a catastrophic setback to their war machine. For the Americans, victory in New Guinea was the first essential step in the long march towards the Japanese home islands and the ultimate destruction of Hirohito’s empire. Winning the war in New Guinea was of critical importance to MacArthur. His avowed “I shall return” to the Philippines could only be accomplished after taking the island.

In this gripping narrative, historian James P. Duffy chronicles the most ruthless combat of the Pacific War, a fight complicated by rampant tropical disease, violent rainstorms, and unforgiving terrain that punished both Axis and Allied forces alike. Drawing on primary sources, War at the End of the World fills in a crucial gap in the history of World War II while offering readers a narrative of the first rank.
James P. Duffy is the author of over a dozen previous books, most on military history. His World War II titles include The Sinking of the Laconia and the U-Boat War, Target America, and Hitler's Secret Pirate Fleet. He has also written on the American Civil War and the rulers of Imperial Russia. He resides with his family in New Jersey.
“A meaty, engrossing narrative history… This will likely stand as the definitive account of the New Guinea campaign.”—The Christian Science Monitor

“A vivid and well-researched chronicle of a 'forgotten fight' that was crucial to Allied victory...[War at the End of the World] gives those who were part of this forgotten fight the recognition they deserve.”—The Wall Street Journal

“This essential book adds insight and detail to a pivotal piece of the overshadowed war in the Pacific.”—Library Journal

“Historians will both admire and envy James P. Duffy’s War at the End of the World, for he has done what so few of us can do: He has provided a dramatic and informative narrative history of an otherwise unknown but essential part of our history. Duffy’s account of Douglas MacArthur’s conquest of New Guinea restores to its proper place one of the greatest, and most brilliant, military campaigns in American history. Beautifully written and carefully researched, Duffy’s narrative will now take its place as the standard history for a too-long-ignored campaign.”—Mark Perry, Author of The Most Dangerous Man in America: The Making of Douglas MacArthur

“Reaching deep into the jungles of New Guinea, James P. Duffy resurrects the spirit of MacArthur, Yamamoto, and the men who fought with rifle and bayonet for the Pacific War’s pivotal island. With swift pace and an unerring sense of drama, War at the End of the World brings to life the brutal campaign that transformed General MacArthur from American hero to Allied conqueror.”—Jonathan W. Jordan, New York Times Bestselling Author of American Warlords and Brothers Rivals Victors

“In War at the End of the World, James P. Duffy has restored to the nation’s memory a forgotten chapter of World War II, the four-year struggle for the world’s largest island, New Guinea. At stake was the future of Australia and the reputation of America’s best-known general, Douglas MacArthur. Don’t miss this vivid, superbly narrated drama, which will leave you with a fresh reservoir of pride in our fighting—and thinking—soldiers.”—Thomas Fleming, Author of The Illusion of Victory: America in World War I

“Duffy expertly unwinds the many disparate threads that make up wartime planning and communication, contrasting strategy with outcome and showing how the chain of command truly takes control in an otherwise chaotic situation…. An entertaining and well-researched war history that will satisfy intrigued novices and devoted students alike.”—Kirkus

“Duffy makes a strong case that MacArthur’s generalship is a major reason for the campaign’s success.”—Publishers Weekly

“Duffy tells the story of this pivotal part of the war in clear prose and in great detail.”—The American Spectator