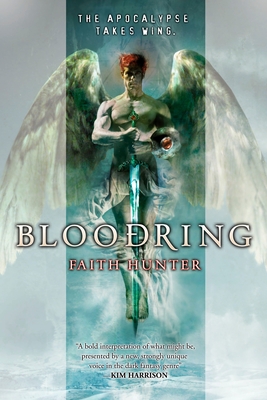 This is book number 1 in the Rogue Mage series.

In a novel filled with lush imagery and exhilarating action, Faith Hunter creates a near-future world caught in the throes of an ambiguous apocalypse - where a woman with everything to hide finds her true destiny revealed.

As humanity struggles with religious strife and seraphs and demons fight a never-ending battle, a new species has arisen. "Neomages" are human in appearance, but able to twist left-over creation energy to their will. A threat to both humans and seraphs, they are confined in luxurious Enclaves.

Thorn St. Croix is no ordinary neomage. Nearly driven insane by her powers, she is smuggled out of an Enclave and now lives among humans, channeling her gift of stone-magery into jewelry making. But when Thaddeus Bartholomew, a dangerously attractive policeman, tells her that her ex-husband has been kidnapped, Thorn risks revealing her identity to find him. And for Thorn, the punishment for revelation is death.

A native of Louisiana, Faith Hunter spent her early years on the bayous and rivers, learning survival skills and the womanly arts. She liked horses, dogs, fishing and crabbing much better than girly skills. She still does.