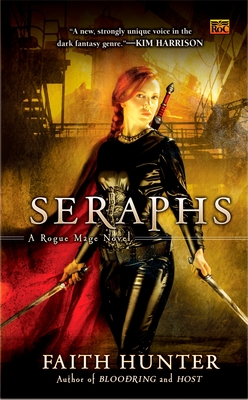 This is book number 2 in the Rogue Mage series.

Living among humans in a post- apocalyptic ice age, neomage Thorn St. Croix is a source of both fear and fascination for the people of Mineral City?and now she faces her ultimate test.

Deep under the snow-covered mountains beyond the village, an imprisoned fallen seraph desperately needs her help. There, hidden in the hellhole, the armies of Darkness assemble to ensure this subterranean rescue will be Thorn?s final descent?
A native of Louisiana, Faith Hunter spent her early years on the bayous and rivers, learning survival skills and the womanly arts. She liked horses, dogs, fishing and crabbing much better than girly skills. She still does.