The Gathering Wind: Hurricane Sandy, the Sailing Ship Bounty, and a Courageous Rescue at Sea (Paperback) 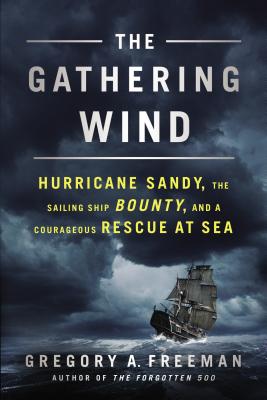 The Gathering Wind: Hurricane Sandy, the Sailing Ship Bounty, and a Courageous Rescue at Sea (Paperback)

By Gregory A. Freeman


Special Order—Subject to Availability
October 2012. A replica of the famous HMS Bounty, an eighteenth-century tall sailing ship, set a collision course with a storm that became the largest hurricane ever recorded in the Atlantic—a clash that proved to be one of the most unforgettable stories of Superstorm Sandy.

The Bounty, crewed by an eclectic team of seafarers and led by highly respected captain Robin Walbridge, departed from Connecticut as Sandy raced north. Walbridge, whose decisions decided the fate of his ship and crew, attempted to outmaneuver the storm by heading southeast. As violent gusts tossed the wooden vessel, the crew fought to save their ship—and themselves. When the storm finally overtook the ship, the crew was tossed into the churning sea.

The men and women of a Coast Guard station in North Carolina courageously flew into hundred-mile-per-hour winds to rescue the survivors of the Bounty. After hours of white-knuckle flying, they accomplished one of their most memorable rescues ever.

Based on interviews with Bounty survivors and unfettered access to Coast Guard rescue team members, The Gathering Wind is the most complete account of this heartbreaking, thrilling, and inspirational story.

INCLUDES PHOTOS
Gregory A. Freeman is an award-winning writer and a leader in the field of narrative nonfiction. Known for books that make a true story read like a gripping, fast-paced novel, his previous works include The Forgotten 500, Sailors to the End, Troubled Water, and The Last Mission of the Wham Bam Boys. He lives in the Atlanta area.
PRAISE FOR THE FORGOTTEN 500

“Told in riveting detail for the first time, The Forgotten 500 is a tale of unsung heroes who went above and beyond.”—James Bradley, New York Times Bestselling Author of Flags of Our Fathers

“A literary and journalistic achievement of the highest order, a book that illuminates, thrills, and reminds us that heroes sometimes do live among us. It will take your breath away.”—Gregg Olsen, New York Times Bestselling Author of The Deep Dark

“Evoking the rescuees’ successive desperation, wild hope, and joy, and their gratitude to the Serbians who risked their lives to help, Freeman produces a breathtaking popular account.”—Booklist

“An exciting, powerful story of escape and rescue. It has been buried for too long.”—Tony Koltz, New York Times Bestselling Author of The Battle for Peace