Catalan Food: Culture and Flavors from the Mediterranean: A Cookbook (Hardcover) 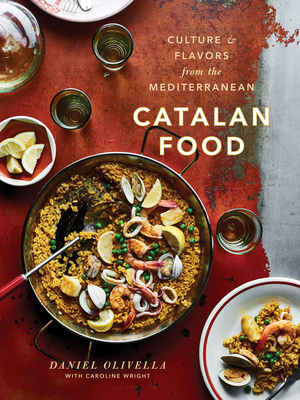 Catalan Food: Culture and Flavors from the Mediterranean: A Cookbook (Hardcover)


Not On Our Shelves—Ships in 1-5 Days
Catalan cuisine authority Daniel Olivella serves historical narratives alongside  80 carefully curated Spanish food recipes, like tapas, paella, and seafood, that are simple and fresh.

In proud, vibrant Catalonia, food is what brings people together—whether neighbors, family, or visitors. By the sea, over a glass of chilled vermouth and the din of happily shared, homemade Pica Pica (tapas) is where you’ll find the most authentic Catalonia. The region is known for its wildly diverse indigenous ingredients, from seafood to jamon Ibérico to strains of rice, and richly flavored cuisine that has remained uniquely Catalan throughout its complex and fraught history.

In Catalan Food, the recipes are intended to be cooked leisurely and with love—the Catalan way. Featuring traditional dishes like Paella Barcelonata (Seafood Paella) and Llom de Porc Canari (Slow-roasted Pork Loin), as well as inventive takes on classics like Tiradito amb Escalivada (Spanish Sashimi with Roasted Vegetable Purees) and Amanida de Tomàquet amb Formatge de Cabra (Texas Peach and Tomato Salad with Goat Cheese), Catalan Food brings heritage into any home cook’s kitchen, where Catalonia’s cuisine was born. To know a culture, you must taste it; none is more rich and stunningly delicious than Catalonia’s.
DANIEL OLIVELLA is a chef with 38 years of experience cooking Spanish food for the American palate. He opened his first restaurant, B44, a Catalan Bistro in San Francisco, in 1999 to critical acclaim. Considered an authority on Spanish cuisine, Olivella has acted as an ambassador for the Texas-based luxury grocer Central Market in their Passport to Spain program. His most recent restaurant endeavor, Barlata, is a tapas restaurant in Austin.

CAROLINE WRIGHT is a cookbook author living in Seattle, Washington, with her family. She has written two cookbooks, and her recipes and writing have appeared in Food Network Magazine, Every Day with Rachael Ray, Southern Living, and Better Homes & Gardens.
"Olivella unveils a vast and deep bounty of flavors in this heartfelt compendium." -Publishers Weekly

“80 recipes that capture the diverse, lively, and celebratory cuisine of the region.” -Epicurious

“[a] culinary love song to the food his mama cooked and to gathering the finest ingredients.” -Bookpage

“These delicious recipes will make you want to soak up the last rays of summer with saffron-stained fingers and paprika-lined lips.” -MyDomaine