Roadfood, 10th Edition: An Eater's Guide to More Than 1,000 of the Best Local Hot Spots and Hidden Gems Across America (Paperback) 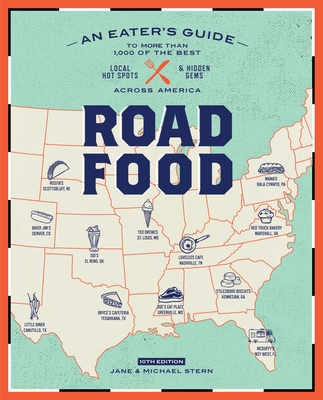 Roadfood, 10th Edition: An Eater's Guide to More Than 1,000 of the Best Local Hot Spots and Hidden Gems Across America (Paperback)


In Stock—Click for Locations
A cornucopia for road warriors and armchair epicures alike, Roadfood is a road map to some of the tastiest treasures in the United States.

First published in 1977, the original Roadfood became an instant classic. James Beard said, "This is a book that you should carry with you, no matter where you are going in these United States. It's a treasure house of information." The 40th anniversary edition of Roadfood includes 1,000 of America's best local eateries along highways and back roads, with nearly 200 new listings, as well as a brand new design.

Filled with enticing alternatives for chain-weary-travelers, Roadfood provides descriptions of and directions to (complete with regional maps) the best lobster shacks on the East Coast; the ultimate barbecue joints down South; the most indulgent steak houses in the Midwest; and dozens of top-notch diners, hotdog stands, ice-cream parlors, and uniquely regional finds in between. Each entry delves into the folkways of a restaurant's locale as well as the dining experience itself, and each is written in the Sterns' entertaining and colorful style.

"The bible for motorists seeking mouthwatering barbecue or homemade pie." - USA Today
JANE and MICHAEL STERN are the authors of more than twenty books about America. Their Roadfood column for Gourmet has won three James Beard Awards. Their Roadfood segments appear regularly on the Television Food Network, and their website, www.roadfood.com, was selected 2001 site of the year by Yahoo. Also regular contributors to NPR’s "The Splendid Table," the Sterns live in West Redding, Connecticut.
"Praised by the Splendid Table, Gourmet, and original American gourmand James Beard, the book is both food guide and anthropological exploration of America’s mostly rural foodways. It’s also...an extremely compelling argument to plan a road trip across a region or even the country. If you don’t already own a copy, or if yours is more than a decade old, now’s the time to put this in your shopping cart."
--Eater