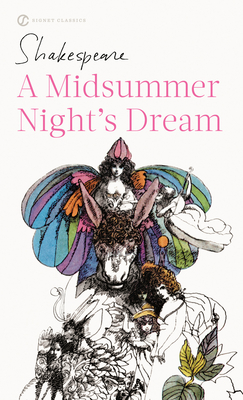 
Not On Our Shelves—Ships in 1-5 Days
Magic, love spells, and an enchanted wood provide the materials for one of Shakespeare’s most delightful comedies.

When four young lovers, fleeing the law and their own mismatched rivalries, take to the forest of Athens, their lives become entangled with a feud between the King and Queen of the Fairies, resulting in a marvelous mix-up of desire and enchantment, merriment and farce....

This title in the Signet Classics Shakespeare series includes:

• An overview of Shakespeare's life, world, and theater
• A special introduction to the play by the editor, Wolfgang Clemen
• A note on the sources from which Shakespeare derived A Midsummer Night’s Dream
• Dramatic criticism from William Hazlitt, John Russell Brown, Frank Hermode, and others
• A comprehensive stage and screen history of notable actors, directors, and productions of A Midsummer Night’s Dream
• Text, notes, and commentaries printed in the clearest, most readable format
• Recommended readings
William Shakespeare (1564–1616) was a poet, playwright, and actor who is widely regarded as one of the most influential writers in the history of the English language. Often referred to as the Bard of Avon, Shakespeare's vast body of work includes comedic, tragic, and historical plays; poems; and 154 sonnets. His dramatic works have been translated into every major language and are performed more often than those of any other playwright.