Why We Can't Wait (Paperback) 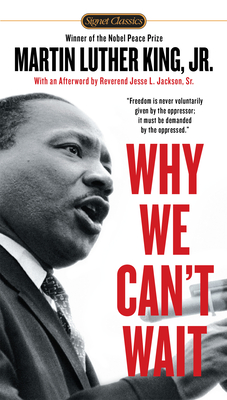 Why We Can't Wait (Paperback)


In Stock—Click for Locations
Martin Luther King’s classic exploration of the events and forces behind the Civil Rights Movement—including his Letter from Birmingham Jail, April 16, 1963.

“There comes a time when the cup of endurance runs over, and men are no longer willing to be plunged into the abyss of despair.”

In 1963, Birmingham, Alabama, was perhaps the most racially segregated city in the United States. The campaign launched by Dr. Martin Luther King, Jr., and the Civil Rights movement on the segregated streets of Birmingham demonstrated to the world the power of nonviolent direct action.

In this remarkable book—winner of the Nobel Peace Prize—Dr. King recounts the story of Birmingham in vivid detail, tracing the history of the struggle for civil rights back to its beginnings three centuries ago and looking to the future, assessing the work to be done beyond Birmingham to bring about full equality for African Americans. Above all, Dr. King offers an eloquent and penetrating analysis of the events and pressures that propelled the Civil Rights movement from lunch counter sit-ins and prayer marches to the forefront of American consciousness.

Since its publication in the 1960s, Why We Can’t Wait has become an indisputable classic. Now, more than ever, it is an enduring testament to the wise and courageous vision of Martin Luther King, Jr.

Includes photographs and an Afterword by Reverend Jesse L. Jackson, Sr.
Martin Luther King, Jr., was born January 15, 1929 in Atlanta, Georgia, the son and grandson of pastors. He graduated from Morehouse College and Crozer Theological Seminary, becoming at age 25 pastor of the Dexter Avenue Baptist Church in Montgomery, Alabama. He subsequently earned his Ph.D. from Boston University. In 1957 he and other civil rights leaders founded the Southern Christian Leadership Conference, an organization he led until his death. A proponent of Gandhian principles of non-violence, he led many protests and demonstrations for civil rights, including the March on Washington for Jobs and Freedom on August 29, 1963, where he delivered his famous “I Have a Dream” speech. Winner of the 1964 Nobel Peace Prize, he continued to fight for civil rights, the eradication of poverty and the end of the Vietnam War. He was assassinated on April 4, 1968 in Memphis, TN.

Reverend Jesse L. Jackson, Sr., is the founder and president of the Rainbow/PUSH Coalition, an organization committed to fighting for social, political, and economic justice for people of all races, genders, and creeds. A two-time candidate for President of the United States, Rev. Jackson has been called the “conscience of the nation.” Rev. Jackson is also renowned for his efforts around the world to spread the promise of democracy, human rights, and peace. Rev. Jackson and his wife, Jacqueline, reside in Chicago and are the proud parents of five children.
“No child should graduate from high school without having read this book. In telling the story of the third American Revolution, it is as integral to American history as the Declaration of Independence.”—Reverend Jesse L. Jackson, Sr.