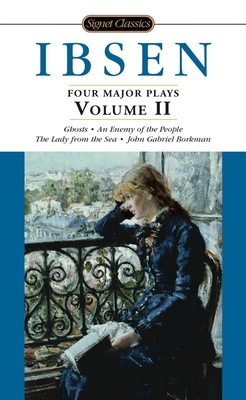 This is book number 2 in the Four Plays by Ibsen series.

The foremost dramatist of his age, Ibsen changed theatre forever with his realistic dialogue and depiction of contemporary social problems. Here are four of his greatest works: Ghosts, An Enemy of the People, The Lady From the Sea, and John Gabriel Borkman.
Henrik Ibsen was born of well-to-do parents at Skien, a small Norwegian coastal town, on March 20, 1828. In 1836 his father went bankrupt, and the family was reduced to near poverty. At the age of fifteen, he was apprenticed to an apothecary in Grimstad. In 1850 Ibsen ventured to Christiania—present-day Oslo—as a student, with the hope of becoming a doctor. On the strength of his first two plays he was appointed “theater-poet” to the new Bergen National Theater, where he wrote five conventional romantic and historical dramas and absorbed the elements of his craft. In 1857 he was called to the directorship of the financially unsound Christiania Norwegian Theater, which failed in 1862. In 1864, exhausted and enraged by the frustration of his efforts toward a national drama and theater, he quit Norway for what became twenty-seven years of voluntary exile abroad. In Italy he wrote the volcanic Brand (1866), which made his reputation and secured him a poet’s stipend from the government. Its companion piece, the phantasmagoric Peer Gynt, followed in 1867, then the immense double play, Emperor and Galilean (1873), expressing his philosophy of civilization. Meanwhile, having moved to Germany, Ibsen had been searching for a new style. With The Pillars of Society he found it; this became the first of twelve plays, appearing at two-year intervals, that confirmed his international standing as the foremost dramatist of his age. In 1900 Ibsen suffered the first of several strokes that incapacitated him. He died in Oslo on May 23, 1906.