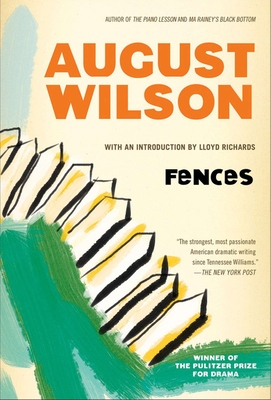 
On Our Shelves Now at:
From legendary playwright August Wilson comes the powerful, stunning dramatic bestseller that won him critical acclaim, including the Tony Award for Best Play and the Pulitzer Prize.

Troy Maxson is a strong man, a hard man. He has had to be to survive. Troy Maxson has gone through life in an America where to be proud and black is to face pressures that could crush a man, body and soul. But the 1950s are yielding to the new spirit of liberation in the 1960s, a spirit that is changing the world Troy Maxson has learned to deal with the only way he can, a spirit that is making him a stranger, angry and afraid, in a world he never knew and to a wife and son he understands less and less. This is a modern classic, a book that deals with the impossibly difficult themes of race in America, set during the Civil Rights Movement of the 1950s and 60s.

Now an Academy Award-winning film directed by and starring Denzel Washington, along with Academy Award and Golden Globe winner Viola Davis.
August Wilson was a major American playwright whose work has been consistently acclaimed as among the finest of the American theater. His first play, Ma Rainey's Black Bottom, won the New York Drama Critics' Circle Award for best new play of 1984-85. His second play, Fences, won numerous awards for best play of the year, 1987, including the Tony Award, the New York Drama Critics' Circle Award, the Drama Desk Award, and the Pulitzer Prize. Joe Turner's Come and Gone, his third play, was voted best play of 1987-1988 by the New York Drama Critics' Circle. In 1990, Wilson was awarded his second Pulitzer Prize for The Piano Lesson. He died in 2005.
"The strongest, most passionate American dramatic writing since Tennessee Williams."—The New York Post

"Fences leaves no doubt that Mr. Wilson is a major writer, combining a poet's ear for vernacular with a robust sense of humor, a sure sense for crackling dramatic incident, and a passionate commitment to a great subject."—The New York Times

"An eloquent play... a comedy-drama that is well-nigh flawless."—New York Magazine

"A work of tremendous impact that summons up gratitude for the beauty of its language, the truth of its character, the power of its portrayals."—Chicago Tribune