Disconnect: The Truth about Cell Phone Radiation, What the Industry Is Doing to Hide It, and How to Protect Your Family (Paperback) 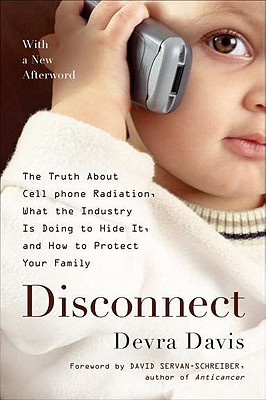 Disconnect: The Truth about Cell Phone Radiation, What the Industry Is Doing to Hide It, and How to Protect Your Family (Paperback)

"As "Disconnect"] shows, cell phones may actually be doing damage to far more than our attention spans-and could, in fact, be killing us." -Salon.com.

Since the invention of radar, cell phone radiation was assumed to be harmless because it wasn't like X-rays. But a sea change is now occurring in the way scientists think about it. The latest research ties this kind of radiation to lowered sperm counts, an increased risk of Alzheimer's, and even cancer. In "Disconnect," National Book Award finalist Devra Davis tells the story of the dangers that the cell phone industry is knowingly exposing us-and our children-to in the pursuit of profit. More than five billion cell phones are currently in use, and that number increases every day. Synthesizing the findings and cautionary advice of leading experts in bioelectricalmagnetics and neuroscience, Davis explains simple safety measures that no one can afford to ignore.

Devra Davis, Ph. D., M. P. H., is a scientist, professor, speaker, and acclaimed author, and recently testified before a United States Senate committee about the dangers of cell phone use. Her first book, "When Smoke Ran Like Water," was a National Book Award finalist. She is the founder of Environmental Health Trust, www.environmentalhealthtrust.org. She lives in Washington, D.C., and Jackson, Wyoming.