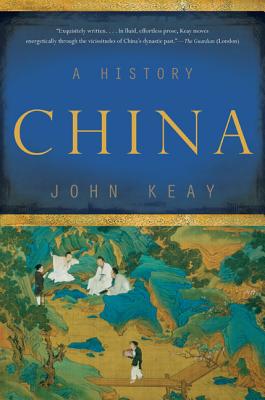 Many nations define themselves in terms of territory or people; China defines itself in terms of history. Taking into account the country's unrivaled, voluminous tradition of history writing, John Keay has composed a vital and illuminating overview of the nation's complex and vivid past. Keay's authoritative history examines 5,000 years in China, from the time of the Three Dynasties through Chairman Mao and the current economic transformation of the country. Crisp, judicious, and engaging, China is the classic single-volume history for anyone seeking to understand the present and future of this immensely powerful nation.
John Keay is the author of several acclaimed books, including China: A History, The Great Arc: The Dramatic Tale of How India Was Mapped and Everest Was Named, and the bestselling India: A History. He was formerly a special correspondent for the Economist, and contributes regularly to the Sunday Telegraph, Times Higher Educational Supplement, and the Literary Review.
"Exquisitely written.... In fluid, effortless
prose, Keay moves energetically through the vicissitudes of China's dynastic
past."—Guardian (UK)

"Here, at roughly 130 pages per millennium, is China's
history from the earliest fragments of Xia dynasty to the last emperor, with a
little of Chairman Mao added for good (or bad) luck. Its core, though, covers
the 'big five' dynasties--Han, Tang, Song, Ming and Qing--from 200 BC to the
start of the twentieth century, and Keay's choice is deliberate. There is no
understanding China present or future without a sense of its past. Much of that
past, by any standard, is awe-inspiring."—Observer(UK)

"Without sacrificing substance for brevity, Keay
manages to illustrate China's history very much as a narrative of the rise and
fall of strong and feeble emperors, bureaucratic cliques and factionalism, the
development of philosophical traditions and religious incarnations, and the
constant restructuring of the empire's geographical boundaries. Readers already
interested in, or wishing newly to embark upon, Chinese history will adore this
book. Highly recommended."—Library Journal