The Interpretation of Cultures (Paperback) 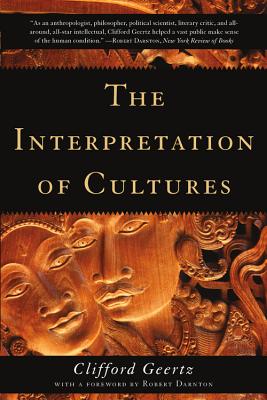 The Interpretation of Cultures (Paperback)


Backordered
One of the twentieth century's most influential books, this classic work of anthropology offers a groundbreaking exploration of what culture is

With The Interpretation of Cultures, the distinguished anthropologist Clifford Geertz developed the concept of thick description, and in so doing, he virtually rewrote the rules of his field. Culture, Geertz argues, does not drive human behavior. Rather, it is a web of symbols that can help us better understand what that behavior means. A thick description explains not only the behavior, but the context in which it occurs, and to describe something thickly, Geertz argues, is the fundamental role of the anthropologist.

Named one of the 100 most important books published since World War II by the Times Literary Supplement, The Interpretation of Cultures transformed how we think about others' cultures and our own. This definitive edition, with a foreword by Robert Darnton, remains an essential book for anthropologists, historians, and anyone else seeking to better understand human cultures.
Clifford Geertz (1926-2006) was a professor at the Institute for Advanced Study at Princeton University, and a Fellow of the American Academy of Arts and Sciences, the American Philosophical Society, the National Academy of Sciences, and the American Association for the Advancement of Science. His book Works and Lives: The Anthropologist as Author won the National Book Critics Circle Award in 1988.
"As an anthropologist, philosopher, political
scientist, literary critic, and all-around, all-star intellectual, Clifford
Geertz helped a vast public make sense of the human condition."—Robert Darnton, New York Review of Books

"The eminent cultural
anthropologist.... Mr. Geertz was considered a founder of interpretive, or
symbolic, anthropology. But his influence extended far beyond anthropology to
many of the social sciences, and his writing had a literary flair that
distinguished him from most theorists and ethnographers."—Andrew Yarrow, New York Times

"Clifford Geertz [was]
an anthropologist whose imaginative studies of cultural groups from other
countries changed the intellectual underpinnings of anthropology and other
social sciences.... Dr. Geertz brought a distinctly literary sensibility to the
study of anthropology with his sophisticated prose and vivid descriptions of
social customs abroad.... Dr. Geertz's ornate, allusive accounts of other cultures
came to define a new field of study called ethnography."—Washington Post

"Clifford Geertz is
one of those rare scholars: the thinking person's liberal, who spurns easy
banalities."—Lionel Shriver, Guardian (UK)

"Clifford Geertz was
the foremost anthropologist of the past 40 years and perhaps the first of his
trade to become world-famous.... His copious works first supplemented, then
superseded the mighty labours of the founding fathers of the discipline."—Independent (UK)

"Clifford Geertz [was]
arguably the best-known and most influential American anthropologist of the
past several decades."—Richard Schweder, Common Knowledge

"One of the most
articulate cultural anthropologists of this generation. Geertz has consistently
attempted to clarify the meaning of 'culture' and to relate that concept to the
actual behavior of individuals and groups."—ElizabethColson, Contemporary Sociology