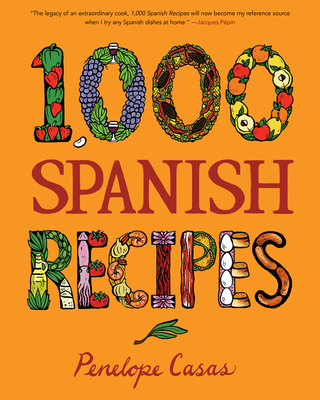 
Not On Our Shelves—Ships in 1-5 Days
The legacy work by one of the most influential experts on Spanish cuisine Penelope Casas was one of the premier experts on Spanish food: She taught Americans about jamón serrano, Manchego cheese, and chorizo, in addition to countless dishes, from patatas bravas to churros. She wrote several acclaimed books, and 1,000 Spanish Recipes is her final work and legacy. It is the latest—and a very special—addition to the award-winning 1,000 Recipes series; in this unmatched collection of simple, precise recipes, she takes readers on a culinary journey of Spain from Galicia to Madrid to the Canary Islands. There is a wealth of options for tapas (including 18 Spanish omelets); soups (11 recipes for gazpacho); salads; main courses; vegetable, bean, and grain dishes (50 paellas!); breads; and desserts (20 types of flan). Icons for vegetarian recipes, special menus, and features on Spanish ingredients and dishes will engage and reassure cooks. This culmination of Casas’s 40-year career and lifelong love affair with Spanish food will be a treasured cookbook and guide.
Penelope Casas was one of the best-known and respected experts on Spanish cuisine. She wrote about food and travel in Spain for the New York Times, Gourmet, Food & Wine, and Conde Nast Traveler and published six books on Spanish cuisine. The Spanish government awarded her both the National Prize of Gastronomy and the Medal of Touristic Merit, and named her Dame of the Order of Civil Merit. She and her Spanish husband guided culinary tours throughout Spain.