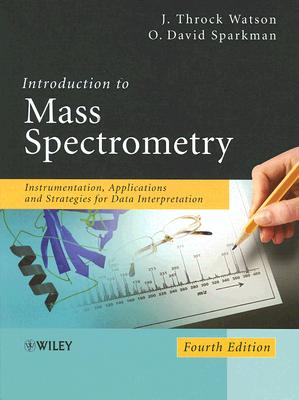 
Special Order—Subject to Availability
Completely revised and updated, this text provides an easy-to-read guide to the concept of mass spectrometry and demonstrates its potential and limitations. Written by internationally recognised experts and utilising real life examples of analyses and applications, the book presents real cases of qualitative and quantitative applications of mass spectrometry. Unlike other mass spectrometry texts, this comprehensive reference provides systematic descriptions of the various types of mass analysers and ionisation, along with corresponding strategies for interpretation of data. The book concludes with a comprehensive 3000 references.

This multi-disciplined text covers the fundamentals as well as recent advance in this topic, providing need-to-know information for researchers in many disciplines including pharmaceutical, environmental and biomedical analysis who are utilizing mass spectrometry

J. Throck Watson is professor of chemistry and biochemistry at Michigan State University. He received his B.S. in 1961from Iowa State University and his PhD in 1965 from MIT. From 1965 - 68 he was a postdoctoral Researcher at the University of Strasbourg from which he transferred in 1969 to the University of Vanderbilt's Department of Pharmacology. In 1980 he was appointed Professor of Biochemistry and Chemistry at Michigan State University as well as Director of the J.T. Watson Mass Spectrometry Facility. In 1990 he was awarded the Pittsburgh Spectroscopy Society Award. He has published over 150 scientific papers, 15 book chapters and 4 books. He currently serves on the editorial board of Mass Spectrometry Reviews and Current Analytical Chemistry. He retired from MSU in August 2006 to complete the writing of this book. O. David Sparkman is currently an Adjunct Professor of Chemistry at the University of the Pacific in Stockton, California; a Consultant to the National Institute of Standards and Technology Mass Spectrometry Data Center. He teaches courses in mass spectrometry and analytical chemistry and manages the mass spectrometry facility. Over the past 30 years, he has developed and taught five different ACS courses in mass spectrometry; he holds positions on the Editorial Advisory Boards of the European Journal of Mass Spectrometry. He is the author of Mass Spectrometry Desk Reference. He has developed and taught 10 sessions of an interactive Web Course on Mass Spectral Interpretation over the past 4 years. David Sparkman has been a member of ASMS since 1977 and the ACS since 1967. He is a former member of the ACS Continuing Education Committee. He was the invited teacher of the Mass Spectral Interpretation course held at the 17th International Mass Spectrometry Conference held in Prague, the Czech Republic, in August of 2006.