No One Would Listen: A True Financial Thriller (Paperback) 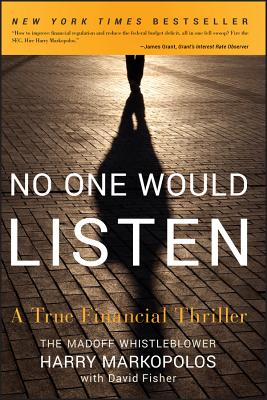 No One Would Listen: A True Financial Thriller (Paperback)

No One Would Listen is the thrilling story of how the Harry Markopolos, a little-known number cruncher from a Boston equity derivatives firm, and his investigative team uncovered Bernie Madoff's scam years before it made headlines, and how they desperately tried to warn the government, the industry, and the financial press.

Page by page, Markopolos details his pursuit of the greatest financial criminal in history, and reveals the massive fraud, governmental incompetence, and criminal collusion that has changed thousands of lives forever-as well as the world's financial system.

Despite repeated written and verbal warnings to the SEC by Harry Markopolos, Bernie Madoff was allowed to continue his operations. No One Would Listen paints a vivid portrait of Markopolos and his determined team of financial sleuths, and what impact Madoff's scam will have on financial markets and regulation for decades to come.

HARRY MARKOPOLOS, a former securities industry executive turned independent financial fraud investigator, was the whistleblower who provided credible and detailed evidence several times from 2000-2008 that should have prompted an immediate investigation by the United States Securities and Exchange Commission into Bernie Madoff's $65 billion Ponzi scheme. Markopolos's investigation was assisted by his investigative team, including Frank Casey, Neil Chelo, and Michael Ocrant. The retelling of their true story was assisted by David Fisher.